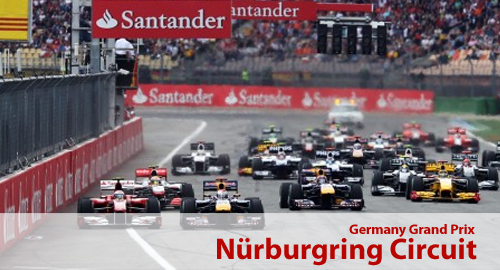 The German Grand Prix was created in 1926 and became a race of the Formula 1 Championship in 1951. Since then, the race has always been disputed without three times in 1955, 1960 and 2007, this last year the event was disputed as the European Grand Prix.

Apart from a passage by the Avus circuit, the race is still shared between the Nürburgring and the Hockenheimring, with a very large majority for the latter since 1977.

Since the 80’s Germany received 12 times the European Grand Prix since 2007 but it was decided that there would be only one race to be shared by both circuits.

The Nürburgring, simply known as “The Ring” by enthusiasts, is a motorsport race track in Nürburg, Germany. It was built in the 1920s around the village and medieval castle of Nürburg in the Eifel, which is about 70 kilometres (43 mi) south of Cologne, and 120 kilometres (75 mi) northwest of Frankfurt. Nicknamed The Green Hell by Jackie Stewart, it is widely considered the toughest, most dangerous and most demanding purpose-built race track in the world.

Originally, the track featured four track configurations: the 28.265 kilometres (17.563 miles) long Gesamtstrecke (“Whole Course”), which in turn consisted of the 22.810 km (14.173 mi) Nordschleife (“Northern Loop”), and the 7.747 km (4.814 mi) Südschleife (“Southern Loop”). There also was a 2.281 km (1.417 mi) warm-up loop called Zielschleife (“Finish Loop”) or better known as Betonschleife, around the pit area. Between 1982 and 1983 the start-finish area was demolished to create a new GP-Strecke, and this is currently used for all major and international racing events. However, the Nordschleife is still in use.