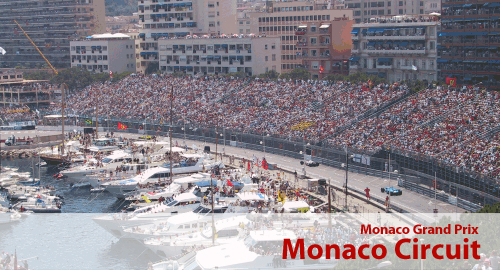 The Monaco Grand Prix is one of the few races to take place on a street circuit. It is one of the oldest and most prestigious automobile races in the world. The first race was won by William Grover-Williams on Bugatti in 1929.

The Monaco Grand Prix is organized by the Automobile Club of Monaco, whose name originally was “Sport Vélocipédique et Automobile de Monaco”,  who also organizes the Monte Carlo Rally.

Anthony Noghes is at the origins of this Grand Prix and Prince Pierre inaugurated it in 1929 by a lap of honor. There were several periods with no Grand Prix in Monaco but since 1955 this is one of the best events for drivers and fans of Formula 1.

If you come to Monaco for Grand Prix, you may want to find a hotel in Monaco or make a restaurant reservation in Monte-Carlo. And for those wishing to live in the Principality we offer you several sites to help you in your search like the yellow pages of Monaco, Monaco banks directory, Monaco real estate listings and the portal of job offers in Monaco.

The track is virtually the same since 1950, there have been some changes especially on the harbour hosting the start line, stands and Sainte Devote or the Rascasse.

The street circuit of Monaco allow to watch the race from a restaurant or a hotel in MonteCarlo but also from a private terrace in VIP hospitality.

If you plan to attend the Monaco Grand Prix, you can find a hotel in Monaco or book a restaurant in Monte-Carlo. And for those who plan to move in the Principality you should have a look to different websites yellow pages Monaco, the directory of banks in Monaco, real estate ads in Monaco and job offers in Monaco.